Taking the Mailable Microsites series further, the Uplers are back with yet another element that creates magic when integrated in an email- Countdown ...

Taking the Mailable Microsites series further, the Uplers are back with yet another element that creates magic when integrated in an email- Countdown in Email.

There’s a big buzz around real-time email marketing. Basically, it is a strategy that uses real time data to create targeted and timely content in emails to provide the subscriber with a better UX.

The same report also states that after comparing their clients’ emails with a countdown to those without one, they found a 15-70% increase in click-through rates.

But what is it that makes a countdown click for email marketers?

It’s basic human psychology. The feeling of being left out or that you’re running out of time can enhance human response. So whether you apply a countdown to a time-bound sale or registration for some event, you are sure to get better response.

The astute Uplers studied the emails by Travelocity to find out how the travel company has changed its customized email templates over the time to include a COUNTDOWN for creating a sense of urgency in their emails to portray special offers and deals.

Email sent by Travelocity in 2015

This email from Travelocity is about a deal which is to last for 24-hours only. The red color does attract attention of the reader to the highlighted deal. Also, they have added the picture of a clock to symbolize that time is passing and the subscribers need to hurry up to grab the deal. But the email is not real time. As in, if the subscriber opens your email after a day or two, they may be confused as to when the deal started and when it gets over. 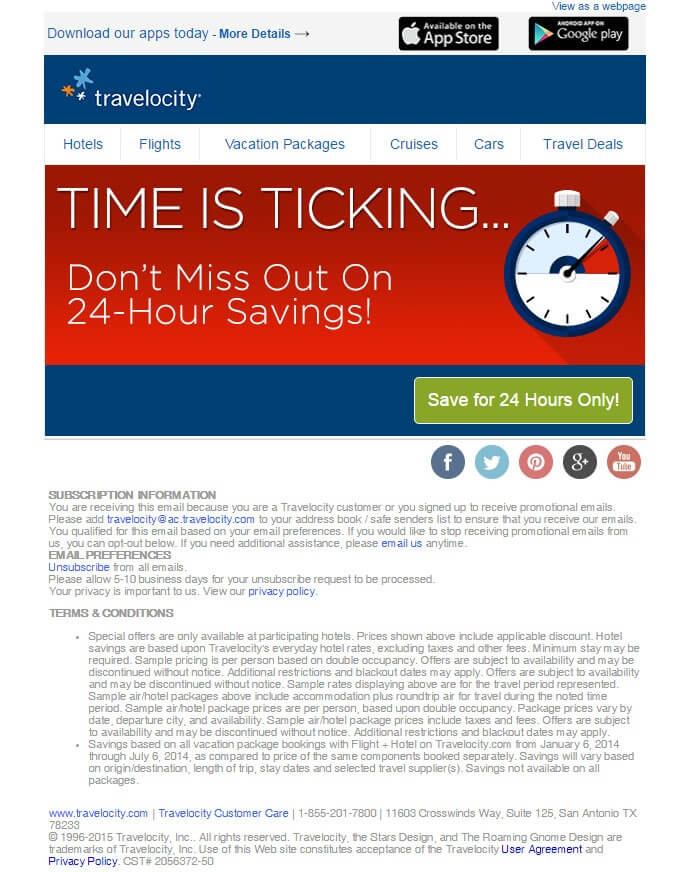 Email sent by Travelocity in 2016

Travelocity changed their strategy a little in the year 2016. The clock is missing but the limelight is on ‘24 Hours’ within which the subscriber can make the most of the deal. Highlighting the deadline often facilitate boost in sales but just a bit. 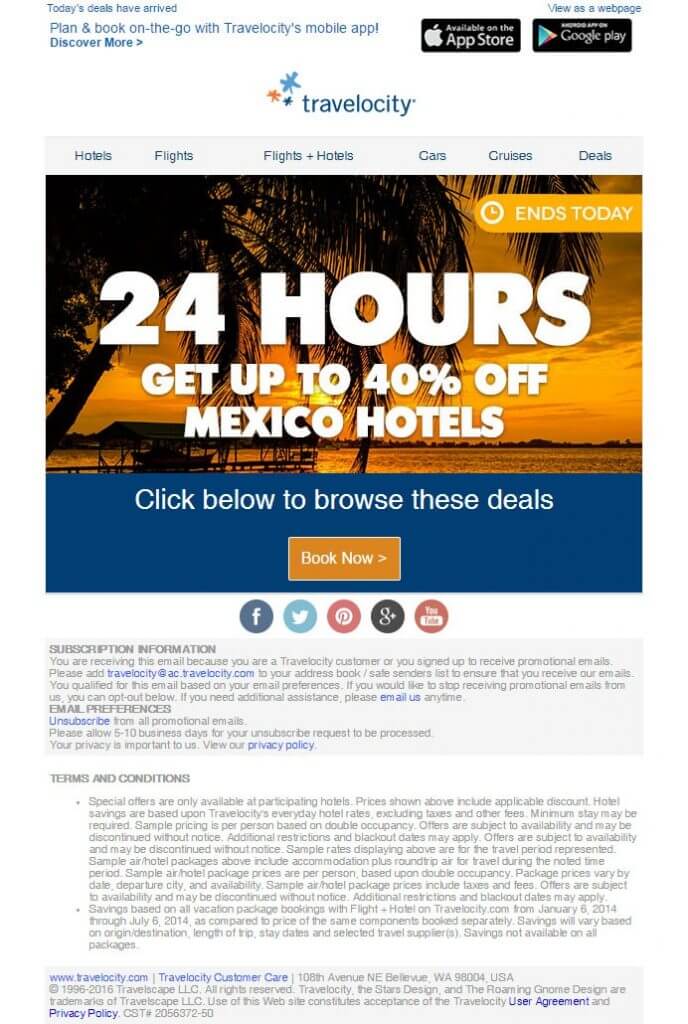 Email sent by Travelocity in 2017

By using a countdown in their email, that too above the fold, Travelocity did a great job in 2017.

The timer is like a ticking bomb. Every time you watch, you have lost some more time; you now have lesser time to make use of the daily offer. The feeling that time is slipping away, creates the urge to act fast before the opportunity is gone. Bingo!

Benefits of Countdown in Email, in a nutshell

Explore our ‘Mailable Microsite Series’ to know about how BIG Brands are using Interactive Elements in emails successfully.

Visual Hierarchy in Emails & the Importance of a Hero Image

How to Ace Personalized Email Marketing With Interactive Content
The Best Email Design Hunt 2017 : A Celebration
Minimalist Email Design – A Timeless Style You Must Embrace